MAJOR MILESTONES THAT WE HAVE ACHIEVED SINCE THE FOUNDATION UNTIL TODAY

History from the first idea to products and services in various stages.

The Buss Energy Group acquires a 24.9 per cent stake in Aero Enterprise. In addition to port logistics for the construction of offshore wind farms, the service group also offers the installation and service of wind turbines and rotor blades both on land and at sea. Due to their professional sales structures and many years of operational experience in the wind sector, the Buss Energy Group represents the perfect strategic partner for us and will help us to further establish our technology on the market.

Our team grows in the areas of operations, hardware & software development and business development. In total, Aero Enterprise consists of 10 technically enthusiastic and committed employees.

Successful inspection flights in the North Sea/Germany. Aero Enterprise uses its new developed helicopter drone for offshore inspection operations for the first time. The AERO-SensorCopter with its special sensor-head performed the autonomous inspection within a remarkably short time.

We passed the EN ISO 9001:2015 certification audit for the airborne inspection for on-/offshore wind turbines and industrial objects of all kind, including data analysis, classification and reporting. Aero Enterprise has passed the established standard in the certification audit with TÜV Austria in December 2018 and thus proves the mastery of quality management according to the international standard.

Start of our drone partner program. Partners deliver images that are taken with their own drones. We evaluate, interpret and generate test reports with our software AERO-Lysis. In July 2018, the AERO-SensorCopters Offshore gets completed. With this equipment we are prepared for use at sea. Wind resistant, suitable for salt water, robust and long flight duration.

Aero Enterprise starts the commercial use of the SensorCopter and operates the flight robot on wind turbines (both domestic and overseas), dams and bridges as part of their inspection performance. The AERO-Software Package will be completed in September 2016. At the same time, the Aero Enterprise exhibits at WindEnergy Hamburg, the second largest European wind energy trade fair. 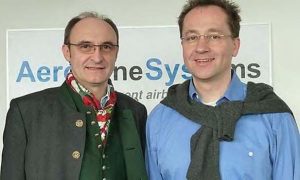 In the course of his work as a helicopter pilot of the German Air Force and aircraft mechanic, the later founder Robert Hörmann first introduced the idea in 2010 to use flying robots for the use of inspection work on wind turbines. In 2013, he founded the sole proprietorship, then named Aerodyne Systems GmbH, based in Lower Austria, and received an innovation prize (Two Country Prize, Special Innovation Award 2013) with his idea. In 2014, the first negotiations with investors starts. In January 2015 the ‘CARPE Beratungs & Beteiligungs GmbH’ joins, and with it the financial and management partner Peter Kurt Fromme-Knoch.

A Company of Buss Energy Group

We use cookies on our website to give you the most relevant experience by remembering your preferences and repeat visits. By clicking “Accept”, you consent to the use of ALL the cookies.
Cookie settingsACCEPT
Manage consent

This website uses cookies to improve your experience while you navigate through the website. Out of these, the cookies that are categorized as necessary are stored on your browser as they are essential for the working of basic functionalities of the website. We also use third-party cookies that help us analyze and understand how you use this website. These cookies will be stored in your browser only with your consent. You also have the option to opt-out of these cookies. But opting out of some of these cookies may affect your browsing experience.
Necessary Always Enabled
Necessary cookies are absolutely essential for the website to function properly. These cookies ensure basic functionalities and security features of the website, anonymously.
Analytics
Analytical cookies are used to understand how visitors interact with the website. These cookies help provide information on metrics the number of visitors, bounce rate, traffic source, etc.
SAVE & ACCEPT
Powered by